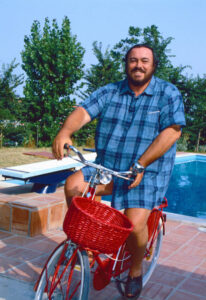 Cycle Recycle: As I ride my bike—spinning my spindly legs over and over again—it’s common for me to recycle the same audio into my helmet-hard head. Often it’s the same chapter from an audiobook, a podcast episode, a TED Talk, a sermon—words. It’s usually something that has challenged me and something I want to better understand, penetrate, believe. Sometimes I just sweat—but sometimes unexpected things emerge, which make my heart beat faster.

Sometimes I listen to music. And sometimes I invite the quiet.

For the last three days, I listened to the same sermon maybe a dozen times. The topic was the chapter that many call the “The Faith Hall of Fame.”  The audio also includes a dramatic, melodic reading of the Hebrews 11 poetic passage. It’s unsettling, it’s settling.

As I was listening and riding this morning, I crested the top of the hill and squeezed left through a narrow gap in the chain-link fence, settled my feet on the ground, and grabbed my water bottle from its cage. I was hot and almost home. I was also in a mostly vacant parking lot that houses a small recycling center in the back corner. Over the voice on my audio, I could hear what sounded like someone belting out a song in Italian. My ears perked up; I love Italian. From my position maybe fifty feet away (I can’t say for sure, I’m not good with numbers), I could see two employees inside the recycling center standing behind the counter. They were still, facing the person outside, whose back was to me, also motionless. From what I could tell, the patron was dressed as a day worker or construction worker—maybe a gardener—wearing a cross between a gardener hat and a fedora. From the distance, out of the three men, I couldn’t tell who was singing. I paused my audio so that I could hear better and turned my body to face them. The music was stunning. The “gardener” turned around and smiled at me through his scruff and dirt and operatic solo, removed his hat and gave a little bow. He continued singing, became even louder, more animated, more emotional—he was Luciano Pavarotti raising his arms to the sky. He even looked like Luciano. Pausing, he yelled directly to me from across the parking lot. He said that he was singing for me, that he loved that I was enjoying his song— and that I was listening to him. He said that’s his reason.

Although the aria was familiar, I couldn’t name the ballad. I will try to keep playing the dramatic melody over and over in my helmet-hard head, invite the quiet, and maybe, By Faith, one day my heart will beat faster, and I will know Luciano’s song.