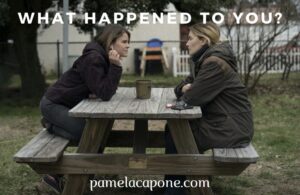 In episode #3 of HBO’s Mare of Easttown aired this past Sunday, there’s a scene between Kate Winslet’s character (Mare) and the mother of Mare’s six-year-old grandson (Drew), Carrie. Carrie’s in a halfway house, trying to get her life back on track, and tells Mare of her intention to regain custody of Drew (who’s been living with grandma, Mare). Carrie’s defensive and tries to minimize the damage she’s done to her son by stating “kids are resilient” and that he won’t remember any of it, because in fact, she—herself—remembers nothing before the age of six. It’s that moment that brought me hurling back to a moment in my own life from several days prior. One that I have lived over and over and over again throughout my life. It was exactly this:

“You were under two years old, you don’t remember any of that. You had it great. You want to talk about mistreatment? I’ll tell you about what it’s like to be mistreated…” and then went on to tell me about how bad they had it as a child.

I never once said it was a competition.

In Brene Brown’s May 5 episode of her Unlocking Us podcast, she speaks with Dr. Bruce D. Perry and Oprah Winfrey about their, book, What Happened to You.

It would be so easy to be long-winded here—why this topic is so meaningful to me. I’m gonna blow just one tiny minty-fresh puff of air your way:

I had ordered the book (What Happened to You), coincidentally, a few days prior to that person reminding me I couldn’t have been traumatized. (I never mentioned the book to them; I never mentioned my trauma. Come to think of it, I didn’t respond to anything they said. I just walked out of the room.) A couple of days after that unfortunate, triggering encounter, the book arrived and I devoured it in two days.

Someone saw me. Someone understood.

If you’re a new parent interested in baby care or if you wonder if your baby can pick up on your household vibe, maybe pick up this book.

Or: If you’re a Someone who wants to understand more about the developing sponge-brain of an infant or toddler—wants to know about childhood trauma in the formative years (or even later years)—this book might be for you. If you’ve ever felt silently judgy about someone’s inability to move past trauma, someone you thought might be milking it or competing or trying to get attention or just “too young to remember” the bad thing that happened, at least give the podcast a whirl.

Why is this important? Because there are a lot of traumatized, unseen, unknown people out there.

I’ve come to understand that there is tremendous wisdom, power, and freedom in believing that two things can be true at the same time. That they don’t cancel one another out. I can put out a blog post like this and still be one of the most grateful people I’ve ever met.