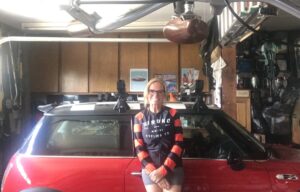 A few days ago, John and I rented the film, Land with Robin Wright. I loved it. No worries, I won’t give it away.

I hadn’t seen Gravity with Sandra Bullock in years, but John happened to be watching it with our son, Joey, yesterday when I joined them on the couch. I actually walked in on my favorite scene and then watched it through to the end. In case you still haven’t seen it, no spoilers here, either (but you really need to get out more).

I will say this. There is a definite, important parallel between the two characters that Robin Wright and Sandra Bullock play. So watch for it (there may be a quiz).

On another parallel track, this morning:

This photo is a reenactment of the moment before a freak accident in my garage. Supportively stationed in my waiting spot, I was leaning against my MINI, watching as Joey packed his car for a road trip he and his little family were about to undertake. Since I’m all about esprit de corps, I was, of course, seeing them off. I was also eager to hop on my bike as soon as they departed. I was as ready as I could comfortably be in my shimmery bike jersey. And my socks. No official padded bike shorts, yet, since they’re a little cumbersome booty-wise what with all that chamois padding. (You don’t want to waddle around the house and garage unnecessarily.) So for the time being, I was just in a regular pair of shorts.

I’m not even sure how to explain what happened next because I was literally just standing there, minding my own bee’s wax, ever-so-slightly—one might even say pleasantly—leaning on my car. All I can tell you is that somehow, without warning, I’m guessing several slippery elements had a party: My gentle lean against the car in my slick bike shirt combined with the shiny-smooth surface of the garage floor combined with my fuzzy socks…and my body was suddenly sucked into an Oscar-worthy gravitational pull performance. I was like space junk or a meteor or a Gatorade or whatever hurtling toward the earth. (I don’t know, I’m not science-y.) It was a freak slippage incident of the weirdest proportions. A moment before, I was completely still. AND THEN? I was completely sucked down—slammed—Landed. Shocked and laughing like a crazy lady, on my padding-free sore bum, I immediately thought of the final scene in the movie and I was like, oh yeah, Gravity. I’m totally Sandra Bullock right now.

And you have to laugh.

Because fightin’ it doesn’t work.

If you haven’t seen Gravity by now, it’s time. And put Land in your queue, while you’re at it. Both are unexpectedly grounding and, I think, both bring some paralleled, unparalleled hope. Where you least expect it.

It can’t hurt. And don’t forget, when all is said and done, there may be a quiz at the end. I don’t know. But I’m betting there is. We all have to land. And that could be the gravity of it.