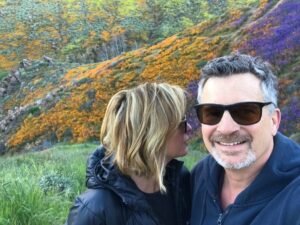 As I watched the string of fully engaged, heart-flayed and splayed, vulnerable-valorous testimonies from the bystanders up against the calloused, heart-detached video and stills of the actual murder and murderer, I kept thinking “what a microcosm of humanity.” Good and bad, what a picture of us.

From the juxtaposed sound of the seen-too-much, gentle pitch of a nine-year-old child to the seasoned, seen too-much, weeping Charles McMillian, holding his weary head in his hands, I was moved to tears, myself. It seems to me they were each driven by the pursuit of truth and accountability—and simply love of their fellow man—they risked, they revealed their broken-open hearts—and they did what they came to do.

Attorney Jerry Blackwell referred to the bystanders as a bouquet of humanity.

Indeed. Every time I saw a wide shot of those wildflowers on the concrete, gathered together by fate or chance—and then seeing them purposefully—courageously—gather together again on that witness stand, I thought the same thing:

What a beautiful, painful display of humanity, doing what they came to do, flowers bearing witness.

They were a superbloom.

A couple years ago, John and I took a drive out Ortega Highway to Lake Elsinore, to see what was being reported as a “Superbloom:” the proliferation of wildflowers resulting from an extraordinary rainy season in Southern California. Concurrently, there was a butterfly phenomenon resulting from their migration to Mexico. This is a video we took of the combination.