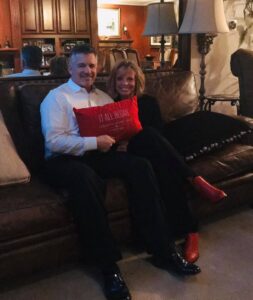 He Has Ulterior Motives

The pillow in the photo is documentation of ulterior motives. It reads: “It all began behind a closed door at church camp 1982.” This excerpt from “Crush,” in I Punched Myself in the Eye, will fill in the blanks:

“Pants brought us together in the first place back in August of 1982. John is the brother of my friend Cheryl, so I had known him for a while—actually, I’d been crushing on him for a while. We were at a beach party and my legs were cold, so he offered me an extra pair of Levi 501s he had in his pickup truck. A few days later, sitting at another bonfire—this time at a church camp—he said he’d like to get those jeans back, like, right now. He walked me back to my cabin, which turned out to be a ruse. Apparently, he was ready to crush back. I handed the jeans to him, and he planted one right on my kisser. “

I’m currently doing some retakes for my audiobook for I Punched Myself in the Eye, and in doing so, I’m revisiting some of my stories—many of which include my husband, John. Doing the reading, especially out loud, is bringing me back. I’ll just be in my little sound booth, smiling. (I should mention it’s a sound booth John built for me.) I’m reminded of how many varied adventures we’ve had over the years. In a couple of months, we will celebrate 37 married years. One anniversary was spent in the South of France, one (the next year) was celebrated, at home, eating leftovers. We have stories about riding ATVs in Marrakesh, and we have stories about when John offered to buy me replacement flowers at Costco.

The MyPillow guy could never supply me with enough pillows to document the stories—and ultimately how many ways John has given me a soft place to fall.

From little things to big things, he steps up. Over the past year, especially, I watch him actively love my parents as if they were his own. I cannot express what this means to me, does to me. Now in their nineties and with declining health, they are requiring more care, and so as I do my part rotating in with other family members, John comes with. Rotates in, with.  I often watch from my spot on the couch with my mom: I’ll see John in the dining room down at my dad’s feet, quietly pulling up dad’s diabetic socks, smiling a sweet smile, and then putting his hand on dad’s shoulder as he stands back up.

This past year, with the pandemic and with him and I “spending so much time at home having leftovers,” someone decided they needed some space. Someone asked someone to please build an outside office on the backyard hill up far away. And so four months or so later, we have a practically finished atelier. 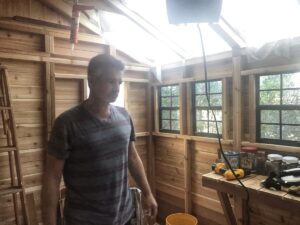 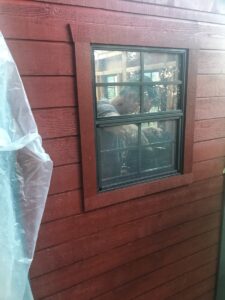 This morning, I ordered a tiny custom door sign for the entrance with a phrase (I think) I coined. It reads, “We have atelier motives.” 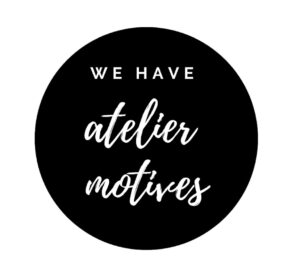 I think that’s our secret sauce. Why we work. In the ways that truly matter, we are aligned, focused, with like purpose.

In many ways, though, John and I are different. And, honestly, sometimes those differences seem to matter a tad too much.

But when I revisit our stories, when I watch him help dad with his insulin from my spot next to mom on the couch, I see a lifetime of intentional love.  A man who generally entertains my whims, who might initially raise an eyebrow (“You want to bushwhack what?” “You really want to put the armoire through the second story window?”), but who steps up, puts his back into it. Lifts. Builds. Smiles.

I have a custom welcome mat for the atelier on its way. It’s going to say a phrase I coined (or thought I coined until I hashtagged it; doggone it): “He said She Shed.”

We sometimes have different ways to view things, but when all is said and built, we have a strong little structure—a house undivided that stands.

It’s not Valentine’s Day—as it was the day last year when we took the photo with the little red pillow. It’s not our anniversary or John’s birthday, it’s a just because day. Thank you for multi-tasking, John, for rotating in, for stepping up, for raising those eyebrows and still doing the thing—for loving so well. 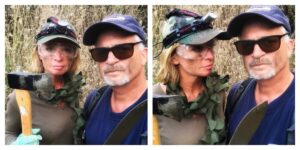 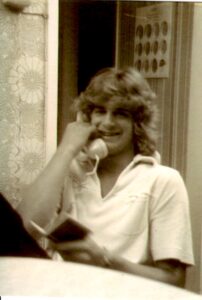 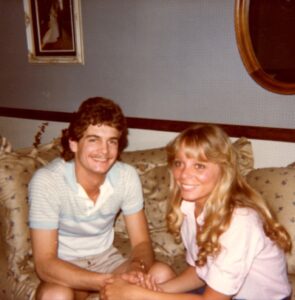 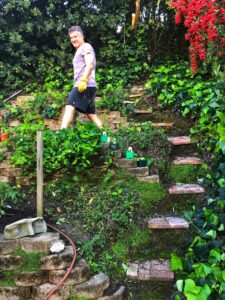 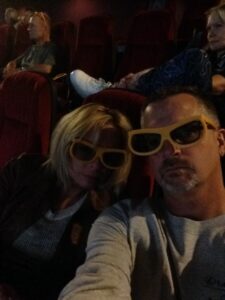 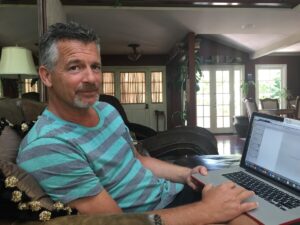 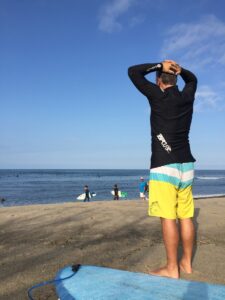 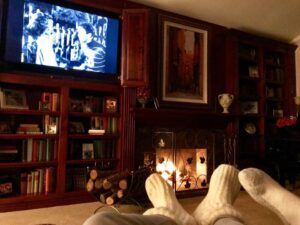 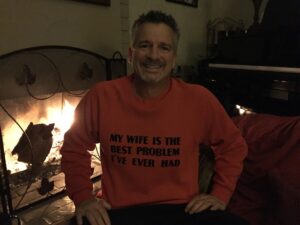 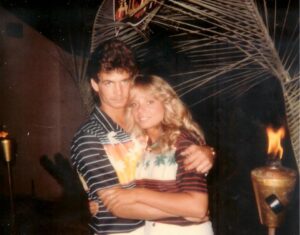 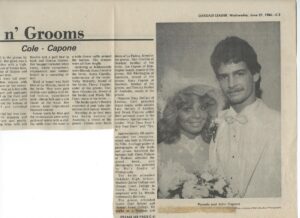