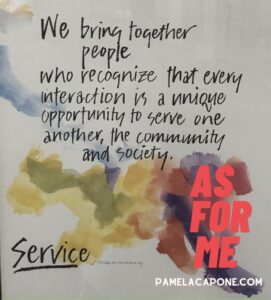 Everything is so BIG these days–the word “unprecedented” is flying off the shelves. People just can’t get enough. I’m not rolling my eyes—I do think things are BIG. Things are terribly unprecedented. Terribly.

But here’s what I also think: Tiny equals big. Tiny acts equal big results. The outcome can take a moment or evolve/devolve over time. And we all have power. At the same time, in many ways, we are powerless.

Last week I was at my annual gyno check-up. The power had gone out before my arrival (I found out later), and so this put a major snafu in the schedule. I ended up waiting over an hour and a half. So with that time, I noticed the watercolor wall coverings that highlighted the key points of the medical group’s mission statement, one of which was “Service: We bring together people who recognize that every interaction is a unique opportunity to serve one another, the community, and society.”

Yesterday I watched half of an eight-minute viral video of an Oregon Trader Joe’s manager who “calmly intercepts anti-mask protestors…” I couldn’t watch the whole thing because, as the poster of the video wrote, “the full eight minutes will kill your brain cells.” Watching it was fingernails-on-chalkboard. I wanted to punch something.

It seems to me that the insurrectionists nearly two weeks ago were all hopped-up on what they thought was their 1776 moment. Same for those subscribing to and promulgating the twisted QAnon ideas…and those “normal” citizens who consciously and unconsciously continue to pass on dangerous misinformation…and those Karens haranguing the Trader Joe’s manager. They’re basically insecure and self-serving. Okay, so I may be judgy, but they all seem to want to be part of something big, play a role in the “unprecedented.”

Every interaction we have—every humble, tiny moment—we come into “contact” with another human being is a unique opportunity to serve. I’ve noticed that there’s a walker on the walking/biking trail who makes a habit of saying “God bless you,” to every person she passes. I think she’s trying to offset things. When I get an enthusiastic and genuine “God bless you!” from her it reminds me of the big-little-things and who we can be again.

Whether we recognize it or not, we’re all in service. Question is, whom do we serve?