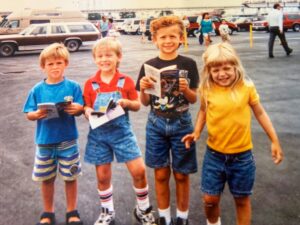 On my desk, I have a Post-it that says, “Fleeting” to remind me that good or bad, it’s temporary.

It’s good to know. Because it’s so freaking easy to forget.

I Facetime with my two-and-a-half-year-old grandson, Brooks, just about every day. He’s been saying a line to me lately that just wrecks me. He looks into the camera and says to me, “Gaga (I’m Gaga), could you tell me sumpin’?”

He began repeating this to me since he overheard me telling my daughter Cassie/his mommy something that happened to me recently on my bike. Brooks is all about bikes so this really piqued his interest and now he wants me to re-tell the same story. And re-tell the story. And re-tell the story. As soon as I’m done telling the story, he smiles, neeeearly satiated, and asks again, “Gaga, could you tell me sumpin’? And so I tell him sumpin,’ I tell him my bike story. The same story. As many times as he wants.

With his sweet voice and curious grin he says those words and my heart does somersaults. I told Cassie that I will never grow tired of repeating the same exact story. Ever. To have his rapt attention like that? I’m floatin’ on the clouds about sumpin’. I can’t remember the last time anyone was that interested in what I had to say.

I so treasure these moments when he gives me his earnest and complete attention, I give it right on back. I try to be so fully present knowing that this moment with him is fleeting. And so, in my mind, I take a photo of his tender expression, I push the red record button on the sound of his sweet voice, I lock it all into the safe of my heart.

Right now I’m sitting next to my ninety-one-year-old mom on the couch. We’re watching Family Feud. My dad’s nearby, leaning over a custom-made puzzle of all of his grandchildren and great-grandchildren. My husband, John, is leaning in from the other side.

I know my time with my mom and dad is fleeting. I have no idea if I have ten more months with them or ten minutes. If I think of that for more than a moment, tears come. I swallow hard absorbing the ephemerality of this life, here, with these precious people.

Presence is powerful. Rapt attention is invaluable, and in my experience, rare. Both are free. But they are often, conscious work.

We are so distracted right now, many of us overwhelmed—and rightfully so—or maybe I should say it’s completely understandable—considering the condition of our country, well, our world. Everything seems so wobbly, untrustworthy. As difficult as this time is, it too, is fleeting.

I was given this snapshot recently—one that I’d never seen before—which made it all the more of a treasure. It’s of my children, Joey and Cassie, and their cousins, Corey and Jacob. Cassie, then, is not much older than Brooks, now. From the looks of the monorail in the background and brochures in their hands, they’re in the Disneyland parking lot, ready for a day of fun—fantastic, exhilarating, in-the-end, exhausting, fleeting fun. I remember that fun, myself. I remember how excited I was as a child in the Disneyland parking lot. It took all of my poised self-discipline to not run ahead. And so, usually, I ran ahead.

When my kids were small, parents a little further along, told me sumpin.’ They’d usually say, “Enjoy them while they’re young, it all goes by in a blink.”

Earlier today, my dad rolled over to mom who’d been napping on the couch next to me. She clearly felt his presence and so she picked her head up from her cradling hand. She opened her eyes and he asked if she’d like to take a spin, then gave her that mischievous wink.

In the space of that moment, I could see the treasured lifetime between the two. 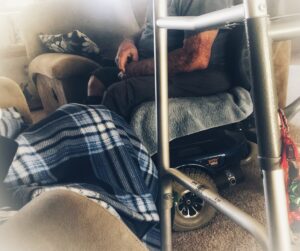 If I could tell you sumpin,’ would you listen? Would I listen? I mean, I still “run ahead.” It’s a “This too shall pass” story that’s been told and re-told and re-told, over and over again—still. James of the Bible wrote that our lives are a mist—appearing for a little while and then vanishes away. So while you’re here, seek to be present with your people—be in it while it lasts that exquisite minute. It’s not here to stay.