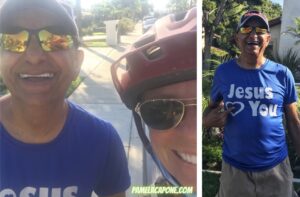 I was so excited, I forgot about my mask.

This is Vijay. Ever since I wrote about him in one of my stories, I’ve hoped to cross paths with him so that I could say hello. Today, as I was finishing up my ride and not far from home, I heard the singing, I saw the shirt with the message, and I saw the smile.

And so I stopped, forgot about the mask (sorry, Vijay), and said hello.

Grateful for my path today.

From The Little Love That Could:

With my Giant bike plastered to the back of my teeny MINI Cooper, I headed out of my neighborhood, down the hill, and stopped behind a car at a red light. To my left, I noticed a man approaching the intersection on the sidewalk. He had on a solid blue T-shirt with white lettering and a gigantic smile plastered on his beaming face. Even from that distance, I could see that the proportion of his pearly whites to his head was striking. I don’t know if he pushed the “walk” button or not, but his grin was pure joy—as if he just couldn’t contain it; as if he had a secret or a treasure; as if he had the best news in the entire world that he yearned to exclaim. Then I noticed the bold white letters on his shirt, exclaiming, “JESUS LOVES YOU.”

In the rear-view window of the car ahead of me, I could see the driver’s eyes, and he had noticed the man’s radiating presence too. I saw them wave to each other. The pedestrian’s smile never broke.

As the light turned green and the car entered the intersection, I moved forward. Making eye contact with the man who was still smiling that crazy, joyful smile, I gave him my smile, a nod, and a thumbs up. He returned my gestures. At the very moment that all of this was unfolding, a melodic, almost haunting tune came from my radio. Miraculously synchronized, the music in my car became a soundtrack to the scene I was in with this stranger as the voice in the song repeated, “I should have known, I should have known . . .”

Translated: Duh, why do you forget?