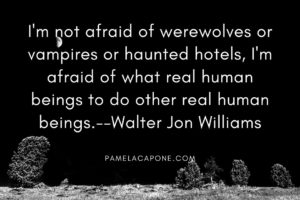 The following is an excerpt from a blog post written on October 4, 2018, shortly after my first encounter with a big cat on the mountain bike trail. At the time, I wasn’t sure if what I had seen was a bobcat or mountain lion. I named the section of the trail, “The Maul” and was a fraidy cat about seeing another. Here’s what I wrote that day:

Today, when I was “at the maul”/on the trail, I came up behind a man jogging. I had already gotten through the dreaded danger-zone section (where I had previously encountered the mountain lion/bobcat) and so I was breathing a little easier now, but still quite hypervigilant as I peddled and listened to a Jesus podcast over the speakers on my iPhone perched in a case on my bike. Don’t roll your eyes.

This jogger was familiar because I have seen him many times before on this path. He generally runs about the same time of day and has a distinctive look and steady, slow pace, always with his head tucked down. He’s in incredible shape, tanned, lean, and strong—with a long silver ponytail spilling out the opening in the back of his baseball cap. Because of the silver hair, I’ve assumed he was much older. Every time I see him I’m impressed at what incredible shape he’s in “for his age.” I think I’ve even said as much to John as we rode together before.

When I came up behind him today, I saw what I thought was a can of a bear repellent in his right hand as he jogged. I’d never seen him carry it before, and I wondered if he had some current scary wildlife information that I also ought to have. And do I also need to pick up a can of bear repellant? I thought I should ask.

I stopped my bike on the path a few feet ahead and waited for him to catch up. I decided to ask the incredibly-fit-old guy, hey what up with the bear spray?

I paused my Jesus podcast.

When he raised his head and looked up at me, I was stunned by his face. I wonder if my jaw dropped. His face matched his body. He was not an old man at all. His eyes were kind and shiny. He had a chiseled, handsome face and reminded me of a character from Cecil B. Demille’s The Ten Commandments, with his hair all silver and flowing—a cross between Charlton Heston and Yul Brynner and mostly Bo Derek’s hunky husband Joshua the Stone Cutter. Only with a silver ponytail pouring out the back of his baseball cap. Dude was straight up Biblical looking. And then to top it all off, he had the voice that could be narrating what I was just listening to on my podcast, the “red letter” parts.

He spoke with what sounded like a Middle Eastern accent, and his name matched my hunch. The man showed me that his “bear spray” was not bear spray at all, but a thermos. Most likely a thermos with cool water.

I told him about my recent cougar sighting and that I was nervous now about the trail, but I didn’t want to avoid it out of fear, because I love this path so.  He gave a comforting, kind smile and confidently said, “You don’t need to fear animals, you need to fear people.”

Thinking of how George Floyd died (among so many others)–and the brutality of human behavior lately–how fitting his words are today.

Since then, I have seen countless cats on the trail. Most if not all, I think, have been bobcats. Since I have first-hand experience and see that they just casually slink away, I no longer have the same fear. And since I have seen so many bobcats up close, I now think there’s a very good chance that the first one was indeed a mountain lion, which is a much more dangerous, predatory animal.

Knowing that, I still go to “the maul.” Don’t get me wrong, I absolutely do not want to encounter a mountain lion. But my desire to enjoy mountain biking and nature overrides my fear of that predator.

There’s a section of paved trail I regularly use to get to the mountain trail. Along the path, there are wanted signs posted of a male predator—not a big cat, but a human being. The police sketch includes the details of a man at large who’s attacked several women.

When I first saw it several months ago (maybe a year?), for a while, I avoided that trail altogether.

I’m careful. I have several tools on my handlebars, including pepper spray, a Garmin to keep track of where I am, and a light to see better. My eyes are wide open.

Below the handlebars, I have a case that holds my iPhone that blasts my Jesus podcast.

I have my cool water.

I think of that Biblical looking/sounding man on the trail who said I shouldn’t worry so much about animals, but people, watch out.

I try to regularly check my assumptions about animals and people, to look for the good, to let hope be the override.  I like to think my heart is open.

I push play on my podcast.