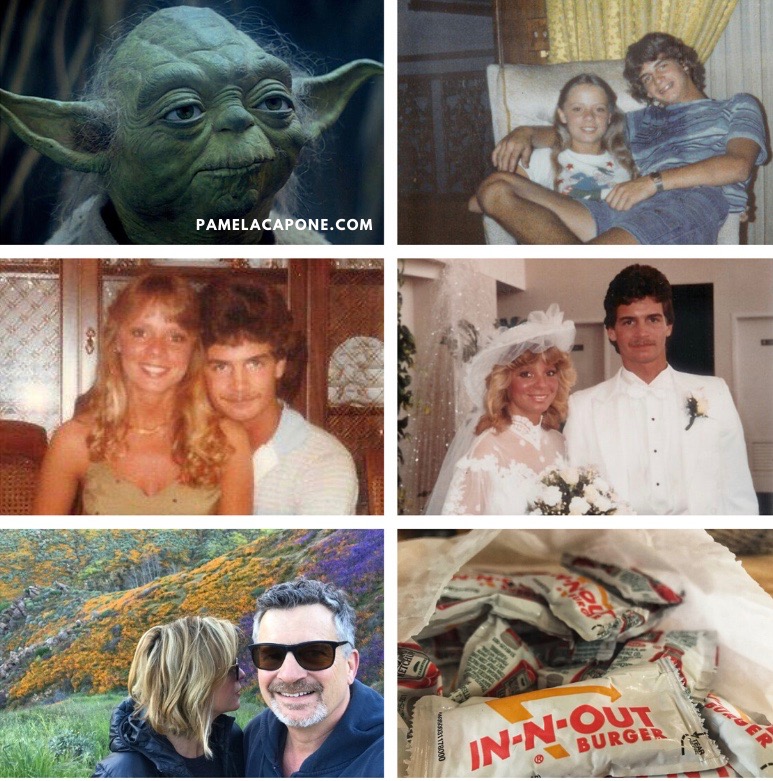 The long strip of sunlight from the gap between the shade and the window seal was enough to illuminate the room and welcome us to the new day. I had just opened my eyes, when John rolled over, took one look at me, smiled, and said, “You look just like Yoda.”

I had never watched Star Wars all the way through but I knew this wasn’t good.

John reminded me of this moment (from years ago) yesterday on our bike ride. Of course, he remembered it a little differently. (His version will be filed away in the folder labeled “Rewritten History.” This bulging subfolder is found within the master folder/tome labeled, “Gaffes: The Things he shouldn’t have said.”)

He recited his version within the following context: We were pedaling along, gazing at the gorgeous wildflowers, when he said, “It’s perfect that you were born in Spring because that’s when all the beauty comes out.” He then added that it’s this type of comment that offsets the Yoda ones.

It practically wipes the gaffes right on out.  (So, thank goodness for that master file.)

The offset of which he speaks might just be The Secret Sauce of Marriage or any good relationship. It’s those moments you go the extra mile to make up for the ones you really screwed up for one reason or another.

The other day John said something that I didn’t agree with, but I just let it be. He looked at me with a question-mark-face, like he was waiting for my retort. (What he didn’t know was that I was tempted before I decided to abort-the-retort.) I just smiled (sweetly) and said, “Letting your partner think what they want to think is The Secret Sauce of Marriage.”

That is also true.

Another example of secret sauce? Thanks for asking.

A couple of weeks ago, we were driving our daughter and grandson back up the 5 freeway to Portland after a month-long quarantine sesh at our place, and we of course, stopped at In-N-Out. As our vehicle inched forward in the long line, we were finally next in the queue to speak to the masked In-N-Out associate. I asked John to request an “obscene amount” of ketchup (and salts) to go with our burgers and fries. I went on to clarify that when we say we’d like “several,” they give you a paltry three, which is woefully inadequate. I reiterated that the word choice “obscene” is key.

John carried it out with precision, and that my friends, was some secret sauce—some “offsetting” for past and future.

What was even more impressive?  On our return trip, back at In-N-Out, and without the instruction/reminder about the salt and “ sauce,” John requested “an obscene amount.” I’d say dude ordered up an obscene amount of secret sauce right there. For past and future gaffes and blunders.

Because of the quarantine, like many of us, I’ve been walking around unsure what day it is. The past week I thought tomorrow was our wedding anniversary. Turns out it’s not for another week. On this June 2, Lord willing, we will celebrate 36 years of an obscene amount of secret sauce. People tend to say we have the perfect marriage. We don’t. But we both do our fair share of offsetting. That might just be what a good hamburger and marriage is all about. And it may be as simple as ketchup.

Full disclosure, John is a really, really good sport. He is a forgiving, forgetful, grace-giving man. I don’t think he keeps a file.

Happy early anniversary, John. Here’s to 36 and one week more.