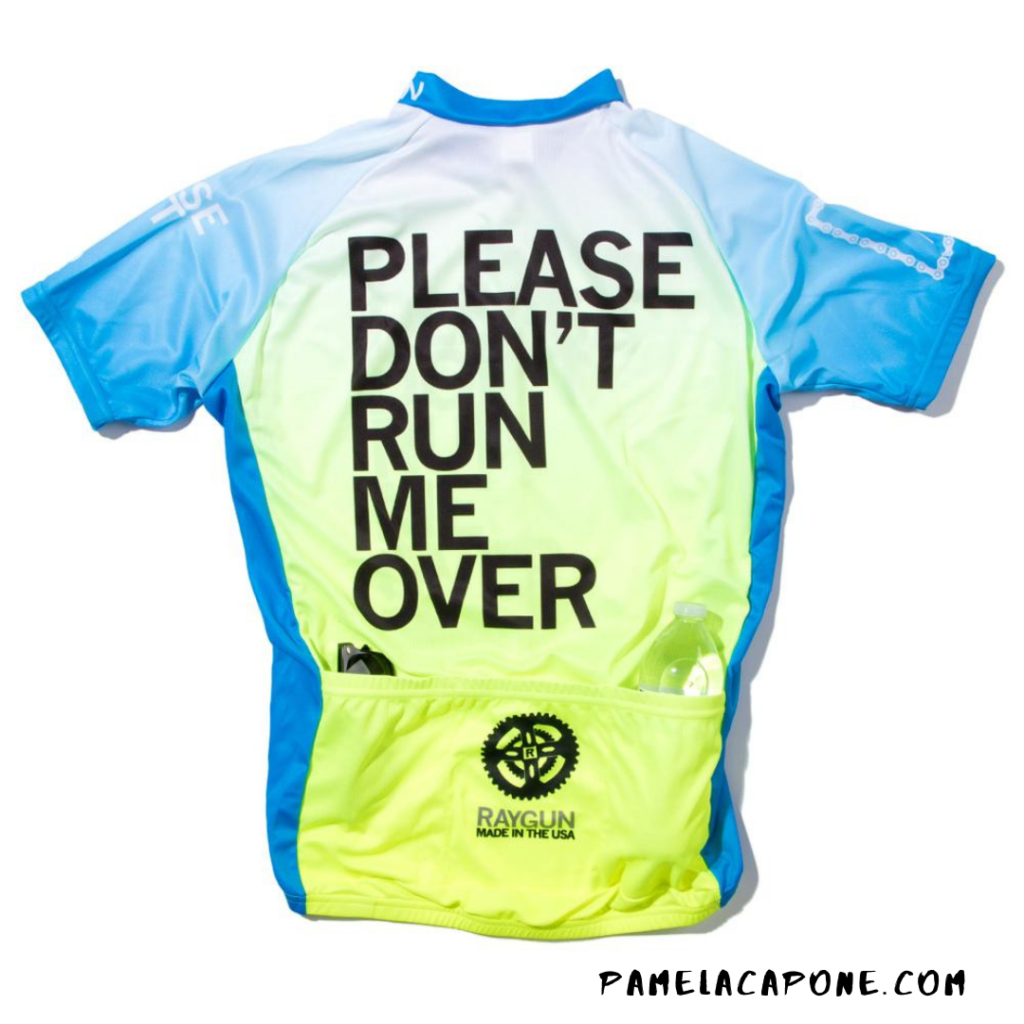 One of the main reasons I bike is that I love taking in the view. The wildflowers right now are CRAZY. I can’t get enough.

I saw a biker wearing this jersey, and it happened to be a couple of days after someone threw a rock at my head from a moving vehicle. I almost asked him if they make one that says, “Please don’t throw a rock at me.”

Since the rock-throwing incident a couple of weeks ago, I’ve had a new normal. I’ve stayed off car-trafficked city streets and have only ridden on biking and mountain trails.

My new normal has included headaches (now mild, previously not-so-mild), being even more tired than I normally am (I have chronic insomnia), a deeper awareness of vulnerability and potential for a blindside, and a heightened sense of whats-wrong-with-humanity aka “how could anyone do that?”

In the grand scheme of things, it was only a rock. It could have been worse. I hold that rock up against all the current news in our world—news like our government having no way of reconnecting thousands of migrant children to their families who were separated at the border—and that rock is a minuscule pebble.

How could anyone do that?

I heard someone say on the news yesterday that thousands of children will have life-long emotional consequences from losing their parents. Ya think?

We don’t know what to do. There is no plan and apparently, there never was.

I recently saw a video of David and Louise Turpin’s sentencing hearing—these are the “parents” who’d tortured and shackled their 13 children inside their Perris, California home for years. I heard David Turpin say he never meant to cause any harm to his kids. He brought them into this world. He starved them. He beat them. He chained them. He made their lives a living horror film.

I listened to the statements given by some of their children. I heard words of survival, forgiveness, and grace.

How could anyone do that?

I heard a pastor say the other day that when Solomon said there’s nothing new under the sun, he was having an off day. The preacher’s premise was that Solomon, in all his wisdom, was not perfect and that he got some things wrong.

In all our wisdom, we’re getting so many things wrong.

Are things getting worse or has it always been this out of control? If you look at history, you might agree with Solomon.

I have to think about that some more. I’ll do it today as I venture out on the city streets where rock-wielders could be.

How could I do that? Because if I don’t, the rock-wielders tell me where to go.

I get to do that.

I’ll be alert. I’ll keep my eyes on the crazy cars and the crazy flowers. Because it’s all there, all under the sun.