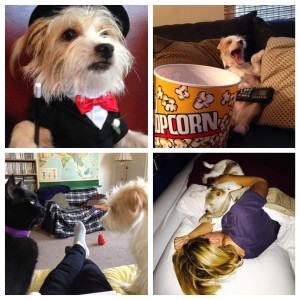 If you have a couple of kids, it’s never fair to compare; to do so can only cause harm. They are individuals and should be respected as such. But canines and felines are altogether different beasts, and I have no problem noting the differences between the two. I’m trying hard not to play favorites. But I am trying and failing.

Walking into my daughter Cassie’s dimly lit apartment and opening the dog crate, I am accosted by a two-year-old Jack Russell pup named Silas. He does the shimmy-shimmy-shake in his efforts to control his pure ebullience.

Tuesday the Cat is off in the corner with paws on the ottoman, gazing out the window at the lovers in the courtyard outside. Wearing a fuchsia beret, he looks over his shoulder as I enter, eyes dripping with condescension. He casually flicks his Gauloise cigarette into the ashtray, then looks back outside. Not so much as a meow.

While I was at the hospital with Cassie as she recovers from a couple of gnarly ankle surgeries, Tuesday had the run of the place, languidly sauntering about. Silas had been in his crate all day. For good reason, he is often called The Troublemaker. Though not by me.

Cassie had taken a nasty fall from a rock-climbing wall. Ankle ended up at an unfortunate angle. So I’m here in Portland on extended stay, hanging out. There’s no place I’d rather be.

If Silas and Tuesday were in a boxing ring, it’s safe to say they would be fit opponents, with less than a pound difference between them. They are like black and white.

While he means no harm, Silas is the master of the coups de main–what the French call a surprise attack. Tuesday will recoil and hiss. Personally, I think the hiss is scary. Even from a distance. But for Silas, he’s like, Whatevs. He thinks it’s playtime.

He’s the consummate life-of-the party, and yet so much more. I know I’m at risk of sounding like a Paris Hilton-type who carries her lapdog in her purse, and I don’t care. Silas is a tiny person in a scruffy dog suit. Just this morning I was making cooing noises in his face and Cassie said, “You know he’s not a baby, right, Mom?”

I didn’t think he could be sweeter or more vulnerable until I gave him a bath the other day and saw him all drenched and soapy.

Although I’m not the kind of person who can sleep with a dog, I wasn’t judgmental about others who did engage in that behavior. Much. But now that I am sleeping on an air mattress on Cassie’s apartment floor and don’t have a choice? Well, let’s just say, I’ve adapted. Silas’s favorite sleeping position is directly on top of me. Second choice is spooning, and third is balling himself up in the bend of my knees when I’m on my side. His little snores? Ridiculously cute.

When I go home, I’m not sure if I’ll be able to sleep without him.

He is a walking around on all fours, a thirteen-pound heart in his chest, an expert at both generously giving and unashamedly receiving love. If we humans could pull off that kind of love? There’d be no meanness to report on the twenty-four-hour news channels.

When Silas was at my home in California three weeks ago, I was horrified when he got into some unknown rat poison in the garage. Cassie and I rushed him to the nearest and most expensive emergency vet. I was traumatized.

On a scratch test at my allergist’s office years ago, it showed that I am equally allergic to both cats and dogs. I’ve never had a real-life reaction to a dog. Cats are another story.

If Silas is a brilliant illustration of joie de vivre, of “Hey, I’m here, let’s do this thing”–living and loving unabashedly with a Gumby-like, malleable, tender, trusting spirit—Tuesday represents the superior, self-contained, elusive, take-you-or-leave-you type.

Or does he? Maybe Tuesday is wearing an aloof cat suit.