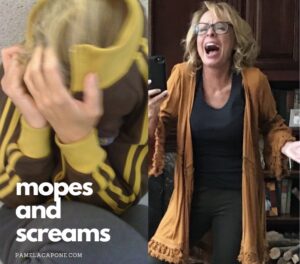 It’s generally more socially acceptable to talk about hopes and dreams. My current reality is somewhere between mopes and screams. Based on the world’s headlines, I don’t think I’m alone.

I’m so over you, karma, the law of attraction, manifest-your-empire social media ka-ka. Just go away.

I’ll pull it back a tick.

There is truth in you reap what you sew. But not always. It’s a general rule, not a guarantee. Like other proverbs. (Yes, I know it’s in the Bible. But so is Job.) Sometimes you work hard and you get squat. Some things make no freaking sense and sometimes things really suck. Several people whom you adore can all die right in a row. Plus Afghanistan, Haiti, global Covid19 +Delta jerking us around, the economy, hunger, homelessness, the political divide, the racial divide, climate crisis, wildfires, etc., ETC. With my current mood, I’m thinking of heading over to all of the guilt-inducing, toxic-positivity-promoting Facebook pages I’ve previously followed and checking unlike.

I’ve recently prescribed myself a healthy, daily reality dose of the Terrible, Thanks for Asking podcast by Nora McInerny because, for one thing, she tells the truth, for another, misery loves company and for yet another—something I heard the writer Carol Kent say in an interview a long time ago that stuck: “People don’t identify with our successes nearly as well as they identify with our sadness and our sorrow.”

At one time or another (and likely more often than we admit), we all have sorrow. But mostly we talk about hopes and dreams. I guess we default there because hopes and dreams are shinier. And the other, we fear, sounds whinier.

My mom’s gone and I am so, so sad. Yes, she was 93. Yes, she lived a long, beautiful, blessed life…and I was lucky to have her. And I’m really, really sad she’s gone.

My previous blog post was about pain, about being real, and the impact of toxic positivity. In that piece, I included a link to the Terrible, Thanks for Asking podcast which was the springboard for that post.

That particular podcast episode was powerful and super timely for me, personally. I loved it. But there was one part where the host, Nora, mentions Dale Carnegie, and I’ve got to tell you, I was like, wait, what? I read How to Win Friends and Influence People as a young person and loved it (even though I did not like the title). It was my go-to. I had it on my nightstand forever. I gave it out as gifts, for crying out loud. Nora seemed to be saying that Dale Carnegie was complicit. I had never thought of his timeless text as Pollyanna-ish, I absorbed it as solid wisdom on effective communication in the context of our classic self-centered, dumb-dumb human behavior. Maybe she was confused and meant Norman Vincent Peale? That I’d get. I don’t know. It’s been a while, so here’s my note to my open-minded self: re-read How to Win Friends and Influence People. I’ll report back.

Today I dosed myself with another Terrible, Thanks for asking episode. In this one, Nora is talking to Dr. Sunita Puri, author of That Good Night, and who serves as Medical Director of the Palliative Medicine Service at Keck Hospital and Norris Cancer Center of the University of Southern California. (The building right next door to the Los Angeles monstrosity I was born in.)

I selected this episode because the topic was death, ‘cause, you know, people around me have been dropping like flies lately.

I want to better understand this mystery we call death. Or it could be, that I’m searching for words to make it hurt less.

Nora introduces Dr. Puri: “…These are big questions, and they’re questions that our guest, Dr. Sunita Puri was contemplating when she was just a kid. Sunita’s mom was a doctor who was in residency when Sunita and her little brother were just little kids. Their mom’s work meant long hours and a lot of time with Dad.”

Dr. Puri: “When my mom was working these insane hours, it was understood he would be here with me and my younger brother. And when I was five, I remember we went to Long John Silver’s and got hushpuppies, and he got me a Hershey’s chocolate bar, just the plain kind. And we drove back through the snow and we sat inside watching the sunset. And I said to him, ‘I want the sky to look this pretty all the time.’ And that’s when he talked to me about how, ‘Nothing stays as beautiful as you want it to. And that, too, is beautiful. That everything that is temporary—realizing that it’s ALL temporary—is the biggest gift I can teach you right now. Because when we hold on to things that are going to change inevitably, we’re the agents of our own suffering. Because we are attaching ourselves to things that we don’t want to change and we’re not accepting that change is going to happen. That plant over there? One day, that plant is going to turn brown and die. Even when I keep watering it. One day I will be old and walk with a cane and you’ll be really sad. But that’s how life goes.’ And I just distinctly remember looking at him and just my mind was blown.”

What does all of this have to do with mopes and screams? Since I’m allowing myself to feel what I feel, I’m admittedly/technically moping. And last week when I was alone, if you were outside my window, you would have heard sobs that were—also admittedly/technically—screams. I wailed over the loss of my mom.

The world is suffering mightily.

If you listen to Dr. Puri’s philosophy, you will hear that she’s a big believer in authentic living, in saying exactly what is real. Like Nora. Their words confirm that anything but that is a disservice.

Listening to Dr. Puri speak about palliative care, I thought of a TED Talk I’d watched some time ago, given by another palliative care doctor, Dr. BJ Miller, who suffered a life-altering injury as a young man. It was this quote in particular:

“Two people can have very much the same circumstances, the same disease perhaps… and one person is sort of taking it in stride and the other person just can’t accommodate the illness, can’t accommodate the diagnosis. I’ll say in my own experience, it took me several years before I stopped comparing my new body to the old body, but when I did stop comparing… and when this became the whole me, not me missing stuff, I stopped suffering. My identity had accommodated the facts of my life. So I like to think about suffering as a gap, like a wedge. The gap between the world you want, and the world you’ve got.” 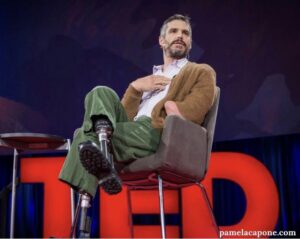 Embracing reality—acceptance of what IS (which includes circumstances AND our pain)–seemed to be what both Doctors Miller and Puri were talking about. Long-term denial causes us to be the agent of our own suffering.

This is just how life goes—to every thing there is a season, and a time to every purpose under heaven.

It’s been one helluva summer, I’m ready for fall.

My autumn “plans” include giving myself permission to feel my losses, to move through my grief at whatever pace I need to move, with the awareness (hope and dream) that with time, the sharp edges will soften.

And about those cries that could be heard outside my window? I’m reminded someone did hear.

Lord, remind us all that the same goes for the daily onslaught of world headlines—the screaming, the heart-wrenching, mind-boggling, global suffering. Hear us. Help us be aware that you are in our presence or just on the other side of that window. Give us a little tap.