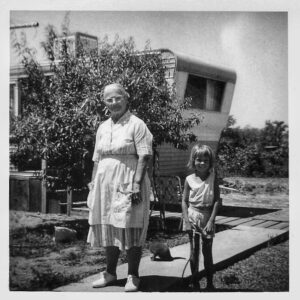 Yesterday on the San Juan Creek Trail bike path coming back from Doheny, I came up behind an elderly woman in a dress ambling along the concrete river bed. From the back, she was a dead ringer for my late grandma Josephine. Same frame, same manner—and most striking was that beautiful silver bun on the back of her head. I’ve been thinking of my grandma a lot, lately. Because of hospital lockdowns in this time of Covid19, I’ve heard story after story of family members who have been forced to say their last goodbyes over Facetime on an iPad. It always makes me cry and reminds me of a treasure I hold dear: When I was 21 years old, my mom and I sat at my grandma Josephine’s bedside and watched her take her final breaths. This left a mark on me. I’ve always known what a privilege it was to be there in that very moment when she passed from this life onto another. I know what it looked like from this side of that world.

This world: We are in a world of suffering right now. If a coronavirus death hasn’t touched you personally, chances are it will. We have all been affected by this virus on some level. No doubt, we’ve all been dirtied by the toxic pollution of this election.

2020 has dealt us blows left and right. Our country has a boxer’s cauliflower ears.

I’ve never really been one to get into politics online because it seems futile and damaging. I still think it’s often futile and damaging, but I have stepped into it lately. I know that I have friends and family who disagree with me. I try not to mention the name Trump, but his overbearing presence is hard to miss.

I have some Facebook friends who I don’t actually know in person, and maybe that was my first mistake. But it chaps me when someone I don’t know, who has never invested so much as a “like” on a photo, will suddenly chime in and disagree “strongly,” to borrow one of Trump’s favorite words. If you’re going to disagree, fine, just invest a little first, huh? Maybe a quick peck to warm me up? I think that’s just good manners. And this happens too, and more often: I’ve known someone for years or maybe a lifetime, and they never engage, if only to “like” someone else’s negative or hurtful comment. I see you. And I guess that’s what you intended. So why are we “friends”?

For my truly beloved friends and family who I do know and who also disagree with me, I love you. We will be in each other’s lives long after Trump vs. Biden. I believe this filthy air will clear. I value you and I choose not to lose you over a difference of opinion about Trump. I won’t let him take you from me. He’s not—and it’s not—worth it.

As far as Trump goes, I don’t hate him. But I’ve got to tell you, I have a mouthful of jagged pills that just won’t go down. The most bitter, barbed horse-pill is his lack of empathy. With over 225K deaths on his watch, dude’s at his red rallies literally dancing on stage, fist-pumping, and weirdly smirking to “YMCA.” I know, because he has no mask.

He’s doing this while people are saying goodbye from hospital waiting rooms via Facetime.

During the debate last week, when he addressed the 545 homeless and parentless children still at the border, his words were: “They are so well taken care of. They’re in facilities that were so clean.” I don’t even know where to begin here. This statement (words, tone, body language) is simply horrifying—and so horrifying—I shouldn’t need to explain why.

Brene Brown teaches us that empathy—which fuels connection—is a choice. She tells us that it is a vulnerable choice because, in order for us to connect with someone else, we have to access something in ourselves that knows that pain—something close that gets us to that feeling—and gets us close to that person.

And here’s what I say in The Little Love That Could about empathy:

“These moments of honest discomfort and pain are maybe some of the very best meeting spots—sacred places—where real heart-action happens. As awful as they can feel, they are gateways to the good stuff. Doors to true intimacy. Treasures to hold dear and near.

David of the Bible—a man after God’s own heart—knew it. Knew that his heavenly Father valued his tears. His Daddy didn’t try to minimize them or whisk them away; He tenderly gathered them up, permitting all and discarding none. Not . . . one . . . drop.

You keep track of all my sorrows. You have collected all my tears in a bottle. You have recorded each one in your book (Psalm 56:8 NLT).

In our humanness, we won’t always know exactly how to honor someone’s grief, but at least we can give them permission to grieve by not rushing past the hard moment. We don’t have to come bearing words either. Usually just our presence, a hug, shedding heartfelt tears of our own, is enough to join them in their sacred place.”

I’ve heard time and time again that “we’re not voting for a husband, or a father, or a neighbor or a babysitter, or a dog walker, etc., we’re voting for a president. I don’t need him to be sensitive. I need him to lead.” I hear you. So what you’re saying is that you wouldn’t trust him alone with your daughter or your dog, you wouldn’t give him the keys to your house while you’re away on vacation so that he can water the plants, but you WILL give him the keys to the nuclear codes. Super.

You may have already cast your vote, and if you haven’t, there’s a good chance if you got to the end of this post, your mind has not been changed. That’s okay, I have to believe we will survive.

I miss you, Grandma. I don’t think I ever said it, but thank you for teaching me manners by demonstrating what not to tolerate. Thank you for letting me sit next to you when you passed into the next, beautiful world we both believed in.