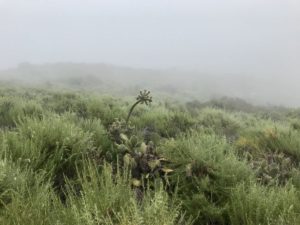 Little Star in the Fog

I noticed this cactus asterisk (I’m assuming it’s a cactus) on my mountain biking trail yesterday,  the day after someone was airlifted out of a ravine down below. With the helicopter swirling above and the ambulance and fire truck perched at the top of the hill, my husband John and I shared a few moments with the friend of the fallen man, who stood there waiting, looking down, looking up. He was visibly shaken about his buddy who had fallen from the “Car Wreck” trail. John said, “I’ll say a prayer for your friend,” which, honestly sounded nice but theoretical—and the friend sort of nodded. As I straddled my bike, also trying to offer a little comfort to the man, the words, “may I say a prayer with you, now?” were on the tip of my tongue the entire time. I didn’t know if it would be off-putting somehow, and so I resisted. John and I ended up pedaling on down Mathis trail, headed for home. I kept craning my neck looking back, thinking about the man in the ravine and the man on the hill.

I kept looking up, looking down.

It’s been two days and I’m still wondering. When I think of them, I pray for them.

Google says that “asterisk” comes from a Greek word meaning “little star” and that it is used to show the omission of something or the passage of time.

As I straddled my bike two days ago, internally debating whether or not I should ask to audibly pray with the man, I ended up omitting something…and now I am here with this passage of time.

Google added this note:  It said that asterisk is commonly mispronounced. “…the right pronunciation is ‘aste-risk.’ You’ve probably heard it pronounced like ‘aste-rix’ or ‘aste-rick,’ but it’s ‘aste-risk.’”

Mountain biking is a risk. Asking if you can pray with a stranger is a risk.

That little prayer could have been a little star in the fog.