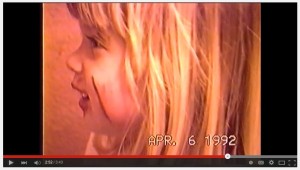 It’s 1992. From behind the lens of an 8mm Sony Handycam, John steps into the threshold of the master bathroom where he finds our three-year-old daughter Cassie, with what appears to be, a guilt-smile, and definite makeup all over her face. Most notable is a vertical, deep red line down her left cheek and a daring lips application. An interesting choice. I’m not sure what she was going for with that line, and she clearly overshot things with the lips.

John/Daddy asks Cassie what she’s up to.

Pointing to her lips, she says, “I was putting makeup on my wips.” There is an effective dramatic pause between “my” and “wips.”

“How come?” he inquires.

“Because I wanted some.” Helllllo, why do most women wear makeup? To punctuate, she smiles and jumps up, clapping her hands.

John, probing, asks her why she’s in her mommy’s make-up drawer.

“I din-din’t go in Momma’s makeup drawer; I just get makeup.” She swings her hands, possibly as a distraction technique.

“But where’d you get the makeup?”

She points to the makeup drawer. Simple. “In here.”

We hear the voice of her six-year-old brother, Joey. He piles on: “That’s Mommy’s makeup drawer . . .”

The camera pans and searches for Joey, finding him sitting on the floor a few inches away from Cassie. He’s almost behind the door, tucked in. Joey’s got a baseball glove in one hand and a ball in the other. He sees the camera on him and he chuckles, as if to say, These kids nowadays! What are you gonna do?

John asks Joey, “What do you think?”

With a contemplative face and a tone of I don’t want to be the one to say it, but . . . He points to the drawer with his eyes, concurring with his dad, and says, “I think she went in there.” Et tu, Brute?

Like father like son, John and Joey continue with the accusation, peppering her with questions. Meanwhile Joey expresses his desire to “play a game a catch” with his dad, which is ignored. He also tosses in a compliment to his sister about her beauty.

Unmoved, she’s like, Let me clarify. “I just get some makeup in that thing, in that big thing. Like that. Like this?” She scrunches her nose, moves close in to the camera

The dog and pony show continues ad nauseam with the threesome’s respective agendas. John asks for a final time about the makeup.

“In that big thing, like that. In the drawer.” Cassie again points to the drawer. She bats her eyelashes. She is the rock of Gibraltar.

“I was putting makeup on my wips,” and looks at her dad with an Okay, can we be done with this now? face.

Eventually, they are done. Albeit a little Miss Understood, she is victorious.

I’d seen this video countless times over the years and concluded that it was primarily a nearly four-minute documentary of a child being caught red-faced and lying, never ‘fessing up. It took me until just recently to see that Cassie was not the three-year-old with the wild, lying eyes Pretty much from the get-go, she joyfully admitted she was putting makeup on her lips. But she seemed to contradict herself. In one breath she said she accessed the makeup, sure, but then when John asked, “Are you supposed to be in Mommy’s makeup drawer?” she unequivocally states that she “din-din’t.” Something doesn’t seem to be adding up.

One day not long ago, I came across the video, and the light bulb over my head flickered. I realized something we’d missed all this time: Cassie took John at his word—or question. She was not lying; she was simply saying, No, I did not get into Momma’s makeup drawer. I did not physically get inside her drawer. My body was not inside that little drawer. What are you, nuts?


Having three years on his sister, Joey had “matured” out of hearing everything in a literal way. He was old enough now to miss that nuance.

The only real embellishment our daughter was guilty of was the smudged, scarlet makeup on her precious face. Joey was right: Cas, you’re pretty. She was a literal little beauty, teaching us a twenty-three-year-old lesson we finally got: Dropping our agendas and assumptions, listening better, playing a game of catch, taking people at their word is literally loving and loving literally.