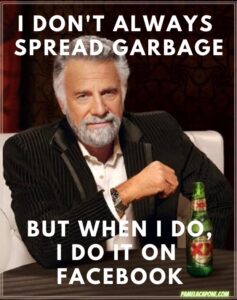 I saw a meme today with a photo of Robin Williams and an imbedded quote below his face. This means, of course, Robin actually said these words, right? What’s more likely true is that some random dude took all of five minutes to create this meme in a program like Canva, and then posted it on Facebook. He takes a respected, admired, famous face and put words in that face’s mouth. I see memes of other famous people with “their” words—often it’s Denzel Washington or Keanu Reeves or Tim Allen or Clint Eastwood or Sam Elliot in his Big Lebowski ten-gallon hat calling certain people a special kind of stupid. It always amazes me how many seemingly intelligent people I know repost these memes—assume the quote is real—and do their part to make an untruth go viral, in order to further their agenda. Or maybe it’s not a famous person’s face, it’s just a graphic with a clever or incendiary political statement, news headline, or some made-up statistic or unverified piece of data.

I recently Netflixed a movie called The Hater. It’s about a college student who works at a PR firm whose sole goal is to undermine businesses and political candidates, by spreading disinformation, fake news which has horrendous results.

Disinformation/fake news is a hot topic these days, of course. Someone told me today that they believe nothing on the news. I found that so sad. I wonder which is worse, to trust nothing from our news sources or to trust and believe everything. I’m somewhere in the middle, leaning way closer to the disbelieving end, I guess. Of course, this also varies on the source. I like to think I’m discerning.

Once trust is lost, it’s so hard to get back. I once had a real-life, personal experience with multiple national and local media sources who spread blatantly inaccurate “facts” about someone close to me. It was so incredibly irresponsible, and it appeared it was intentionally sensationalized, details were actually fabricated. It felt incredibly violating. So yeah, I know that fake news is a thing. And it’s damaging. I watched the Jake Gyllenhaal movie, Nightcrawler, a few years ago. It was about the lengths some reporters/news outlets will go to get the scoop, or even create a scoop. They believed if it bleeds, it leads.

Our social media newsfeeds are disgustingly polluted right now and I have no doubt between now and November 3rd, it’s going to get dirtier, uglier, meaner, more deceptive and manipulative and garbage-y than ever.

No matter which side of the pile you’re on, I hope we all start to think twice before reposting a divisive meme with a theme, or data we have no clue whether or not it’s accurate.

Bernard Meltzer said, “Before you speak (post) ask yourself if what you are going to say is true, is kind, is necessary, is helpful. If the answer is no, maybe what you are about to say should be left unsaid.”