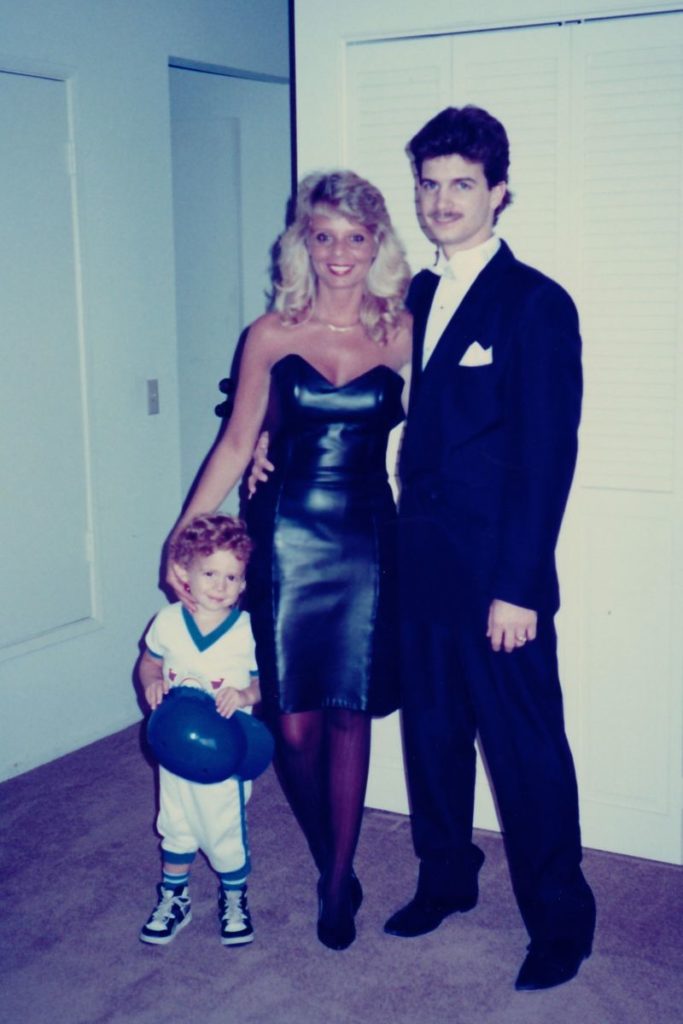 Our babysitter took this photo way back when. John and I were headed to the Universal Amphitheatre to see a show. I think it was Kenny G. Or maybe it was Stevie Wonder. At this moment captured by the sitter, I was excited about our evening out. (John too, since he was working six days a week, as evidenced by his sheet-white face compared to my ridiculous tan.)

After our arrival at the venue, I noticed no one else in that massive crowd was dressed quite so over the top. Because of that, I felt like a dork that night, all shiny in my leather dress.

I guess what it came down to was my concern with how I was being perceived by others. I know that now.

I can share this photo and my commentary because I’ve learned to laugh at myself.

I don’t know what’s worse, being overdressed for an event, or underdressed. I’ve been in both “camps” and I sort of think my natural choice is the latter. Somehow, it feels like the lesser of two evils. If you’re underdressed, you might have twinges of discomfort, but you can still be cool. You’re not “trying too hard.”

It seems like there are two distinctive camps with this coronavirus reaction. That said, I do think there are tons of gray area outside the extreme camps. Like others, I fall somewhere in the gray. I think it’s serious enough to take precautions. Of those in the one camp who are rolling their eyes and say it’s all complete nonsense, let’s call them underdressers. To those who were recorded on video last week, sweating, running through Costco headed for the toilet paper aisle, we’ll call them overdressers.

Many years have passed since that night of the concert, and I’m a lot less self-conscious but more self-aware than that woman in the photo with the Farrah hair. There’s a big difference. I understand a lot more often than I used to, why I do what I do, when I do it. Some might call it an unholy compromise, but the older I get, I see that empathy and connectedness tend to live in the gray areas. When I am more open to nuance, my arms are more open.

I’m still capable of under or overdressing, but I’m much more able to recognize it. I used to think things were so black and white, like John’s suit, but the more I learn, the more I see how much I don’t know. Makes me think of the Socratic paradox, “The more I know, the more I realize I know nothing.”

I think most of us can agree that we have just lived through an unprecedented, bizarre week. I haven’t turned the news on yet today to see what else has been ratcheted up since yesterday. But I did practice balance and tune in to a live stream of my church service.

In these strange days, I hope we can start to see the good that will come from all of this. Maybe we can BE the over-the-top good that comes. Fewer know-it-alls, less black and white, more nuance—live in the many, more universal shades of gray.