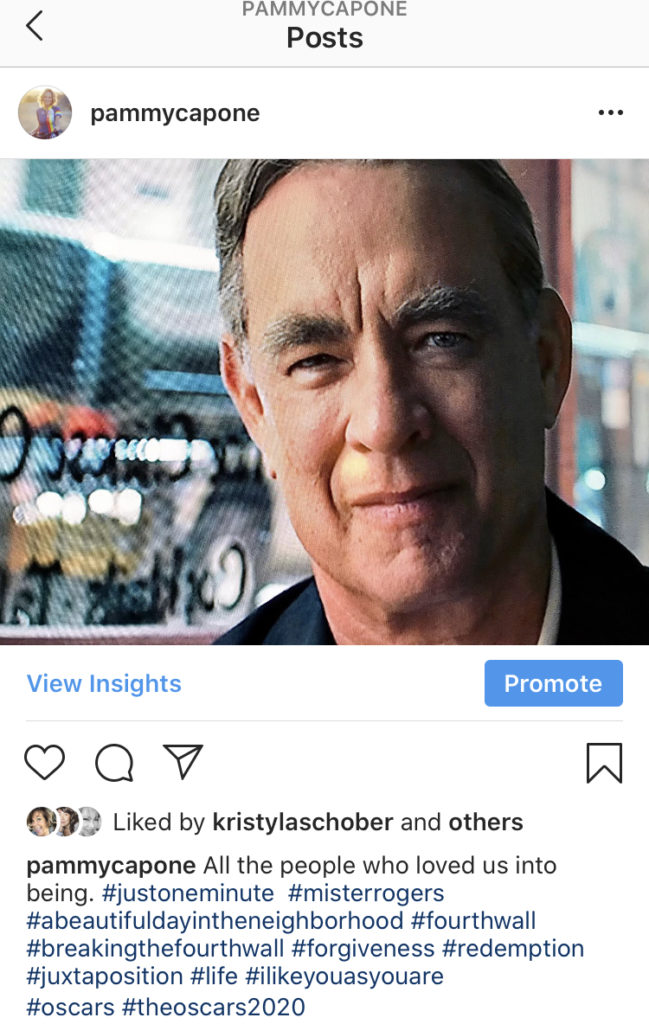 Spoiler alert if you haven’t seen “A Beautiful Day in the Neighborhood.” If you haven’t, you can see it today via Amazon Prime. I’m not going to tell you how to spend your day, but go ahead and spend one hour and forty-five minutes watching “A Beautiful Day in the Neighborhood.” Do it for the children. Or your neighbor’s children. (If it makes you feel better, I was just about to go out for a mountain bike ride, but the weatherman flat out lied and said rain was coming at noon, and now it just started raining and it’s only 8:30. Not very neighborly if you ask me. Now I have time to try a re-watch/get through “The Irishman” because I fell asleep the first time. B-O-R-I-N-G. But I digress.)

We talk about American exceptionalism, nationalism and even xenophobia. I’ve long considered myself a patriotic person—thankful for our country and its many blessings, our freedom, opportunity, etc. I’m deeply grateful. I am. And I’ve also traveled the world a good bit. I think there are some pretty awesome places out there, and sometimes I wonder, why do we think we’re “all that.” Doesn’t Jesus love all the little children of the world, aren’t we all precious in his sight? Between us, I can’t wrap my brain around all the talk about these virtual (and real) lines. Walls. There, I said it. And this isn’t about politics, so don’t get all up in my face about that, missy.

I watched “A Beautiful Day in the Neighborhood” last night, which is loosely based on/from a piece in The Atlantic. I’ll get to my next point, relax.

Point B has the spoiler alert: There’s a scene where Mister Rogers (played by Tom Hanks) is in a café talking to the journalist Lloyd Vogel (Matthew Rhys). Mister Rogers is gently, simply and wisely helping a reluctant Lloyd with his estranged relationship with his father by enlightening him that as tough as it is/ was, his dad helped shape his life. Tom/Mister Rogers breaks the fourth wall, in my opinion, and looks directly into the camera (at you, me and that obnoxious peeking Tom cat lurking from the other side of my French doors). Mister Rogers quietly says that these difficult people are “All the people who loved us into being.”

Let’s circle back to point A:

We’re all neighbors. Doesn’t matter if you’re Tim Taylor peeking over the fence to the sage Wilson Wilson or with a tap on your WhatsApp, video-talking to your best friend in Papua New Guinea. We’re neighbors.

We may not have defined/seen/felt their behavior as love, but do you know everything? Is it possible there’s one teeny morsel of truth missing that you just don’t have access to, one morsel of info that might change everything? If you’re like me, you’ve spent some time judging their behavior—dwelling on it like Lloyd—concluding that what they did was anything but loving (crappy, even), but maybe, just maybe, they were doing the best they could with what they knew. About you. Or, maybe their behavior had zero to do with you. And had everything to do with what they still had to learn about themselves. PS. Since I always make it a habit to see every Oscar-nominated movie before the big show (it’s a calling), I also watched “Jojo Rabbit” yesterday. The quote at the end: “Let everything happen to you. Beauty and terror. Just keep going. No feeling is final.” –Rainer Maria Rilke And if I can be so obnoxious, I’d like to offer one of my own quotes: “This life is both exquisite beauty and excruciating pain. Expect nothing less. Accept all.”